A Brief History of C.O.M.B.O.TM 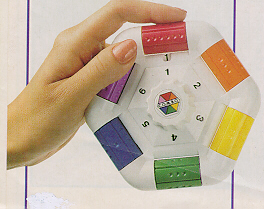 Conceived in 1981 as "Rubik's Donut". Several sketches and design contraints turned it into a set of six cylinders whose axes form a hexagon. Each cylinder consisted of six wedges, all held in place by an upper and a lower plate, attached at the central axis.

In 1985, a patent was applied for and mechanical drawings were made for 1) the working aluminum prototype, and, 2) the molded final product.

At the 1987 New York Toy Fair the aluminum prototype was shown to several small companies and one major toy company. The product was not accepted that year.

In 1988, an agreement was made with Daniels, DuPree, and Dunn to give them rights to the invention to manufacture and sell the product. The name was changed to C.O.M.B.O.TM due to concerns about encouraging children toward illegal activity. Although they were able to see the product through to the manufacturing stage (in Taiwan), the company never placed the toy on the market. Due to this inability to fulfill their minimum performance conditions, and the product was back in the inventor's hands.

In 1992, the product was sold through the catalog of Bits & Pieces.

The most important things gained through this experience are: